We played out the first four turns of the Campaign. Minor change in participants... The former Bretonnians are actually Orcs, and what I formerly referred to as Orcs & Goblins are just Goblins.

After four turns we've mostly had just minor skirmishes. The quelling of a couple of independent settlements took its toll on a few banners. Due to casualties, two Orc banners have merged into the now larger Orc 1. In the first turn, Skaven 1 and Goblin 2 met and fought over the highland villages in L6. The goblins were killed or sent running and lost in the mountains. The Lizardmen aggressively invaded the Ogre kingdom -- the smaller Ogre border force fought in an orderly retreat, and sought shelter in the safety of their capital city. It is uncertain yet if a siege will be fought or not. 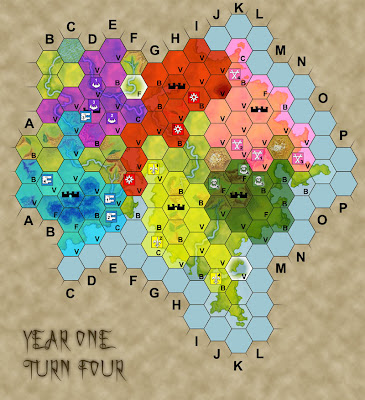 Posted by ZeroTwentythree at 7:58 PM