Four of the Team BREWS Clevelanders headed down to Columbus for this year's Siege at the Tower, at the Guardtower game store. The roads & weather appeared clear, but we had some tense moments on the way down, with slippery patches on the highway and occasional snow. But both cars made it down (let's call them... Team Brews West and Team Brews East/Central.)

We brought with us.... Ogre Kingdoms, Dwarfs, Dark Elves, and my Marienburgers (Empire.) The rest of the pack (about 20) was an odd mix. No High Elves or Vampires, and only one each of Warriors of Chaos, Daemons, and Skaven. On the other hand there were two Ogres, two Beasts, two Bretonnnians, one each Empire and Wood Elves. (I think I'm remembering those numbers correctly.) Dark Elves were the most represented with three armies. So basically -- in my opinion -- there were a limited number of "top tier" armies and a whole lot of middle and lower power armies. This may have had one of two effects... One, just one or two of the armies would dominate, or Two, everyone would have a good shot at it. As it turned out, I think it was the latter.


My army was essentially:

That's it. Nothing fancy. The general had the Mace of Helstrum, the Mage had the Rod of Power. There were a few other minor magic items (wards, armour, etc.) but nothing too tricksy.


No detailed battle reports this time (again.) I was really just looking to relax and play a few games. I was hopping to not lose all of them.


Game One
vs. Brett's Lizards 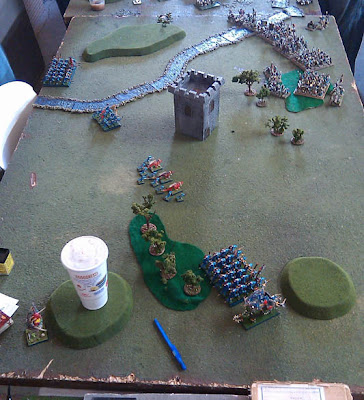 The scenario was Meeting Engagement. (I think that's the one. It's the scenario with the diagonal set up and units held in reserve.) I deployed second, though that was somewhat irrelevant. Considering the two armies, I had to hunker down in that far corner.

We had several pieces of Mysterious Terrain (all woods and rivers -- this was a tournament-wide rule.) The river -- much to the chagrin of my hnandgunners who deployed in it -- was a River of Fire or some such thing. The woods in which I deployed made my units inside cause Fear.

It was a bit of a slow, shoot & magic match with few casualties. From the deployment, you can see that the Stegadon and big Saurus unit in the foreground had a bit of marching before they got to the action. I nailed the big lizard with artillery for something like 3-4 turns, and the Slann kept healing it (Lore of Life.) Finally I was able to bring it down with enough wounds in a single turn, before it got to me. The Sauruses (Sauri?) never made it to combat. They rolled horrible charge rolls three turns in a roll. That was my denied flank, and it worked.

The Slann also never even approached combat, nor made it to the area of the tower. So the only close combats were some scouting Skinks on the far side of the river, and the Sauruses in that same area. The Skinks popped up near the the artillery, moved up and started trying to blowgun the crew. My Handgunners saw a dual opportunity. They charged out of the Flaming River of Fiery Pain and Death, and had a better shot at beating the Skinks in combat than they did shooting at them. They won the first round, drove them off and pursued to a safe spot on the flank.

The Sauruses advanced, and slowed for at least one turn to try to cross the river. After they did so, I moved my greatswords and swordsmen up to double-team them. But by the time this all happened, it was late in the game and neither of us could cause enough casualties to gain any VP.

So in the end, I lost a unit of handgunners who fled and never rallied. My only other casualties were from some Salamander fire on my Spearmen in the woods. I killed the Stegadon, the Skink scouts for VP. I had nearly wiped out a unit of Skinks + Krox, but my opponent hit the remainder (one Skink and one Krox with a single wound left) behind his army & terrain so I couldn't get to it. At one point the Salamanders were down to a single Sally with one wound left, and two handlers, but they were healed back. Similarly, both units of Sauruses were damaged -- one was below half strength, even after being healed as well.

I got a solid victory out of the match. 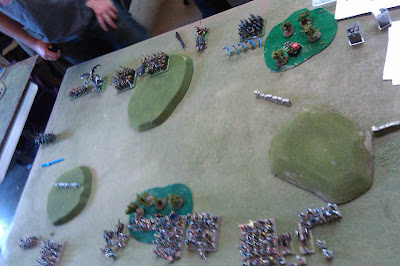 The scenario was Dawn Attack. During the course of deployment, we learned that the woods in which I deployed (foreground, center) were just normal woods.

Berkley had (from left to right)... Dark Riders, 12 Crossbow, a Lord (Lady, actually) on a Dragon, two units of Warriors and a Chariot hiding between them, a second Chariot beyond the hill, Black Guard and Harpies.

My opponent went first, as was the case in all three games. But one my half of turn one I managed to land two perfect mortar shots, wipe out about 1/2 the Black Guard, wound a mage, kill 1/3 of a unit of Warriors (also with a mage in the unit) and send them fleeing to the back edge of the table, and take out the Dark Riders. I couldn't wound the Dragon or Chariots, but I still thought I had a huge advantage to the game. I even offered to start over.

As it turns out... it wasn't so disastrous to the DE. I was never able to kill the dragon (and certainly not the rider with the inverse ward plus 1+ saves), but I did tie it up the whole game, after it ate a mortar, with a unit of swordsmen. Although I lost my Lv. 4 mage, I did kill off all the black guard, both chariots, and one (or was it two?) unit of spearmen, the enemy BSB and one of the mages. I got the harpies down to one model, but couldn't seal the deal.

The harpies were the MVP on the DE side. They took down a Cannon, Mortar and unit of Crossbowmen. I also lost the rest of the artillery, one unit of handgunners, the Lv 4 (as previously mentioned) and the unit of Swordsmen I fed to the Dragon.

At any rate, the result was a very close draw. 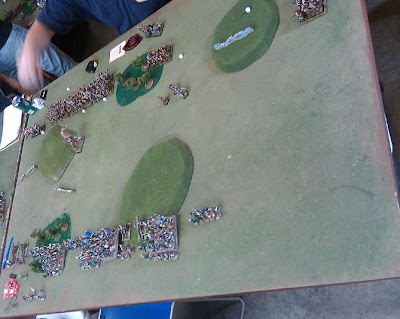 This one was just a straight-up battle. My opponent had, from left to right...

3 Minos, 2x24 Gors, 20(?) Bestigors, more Gors, Chariot, a Giant, Ungors. Off the table he had three more units (15-18?) of Ambushing troops. I think two were Gors, one was Ungors. One unit of Gors showed up in the first turn, behind my artillery opposite the Minos. The other two came on later, on his side of the table, along my right flank.

My artillery was doomed from the start. Especially on my left. They didn't even get off a decent shot before dying. But they tied up the Minos and ambushing Gors for a couple turns. I forgot to move my Engineer out of danger, so just before he got charged by the Gors, I managed to cast Shield of Thorns on him. I rolled up an amazing 12 S3 hits, but then botched the dice on the actual to-wound roll and only killed something like two of them.

In the woods (which also made my units cause fear -- but I forgot that rule the entire game) my Spearmen, Crossbow and Handgunners (to the right of the woods) tried to stand tall in spite of the overwhelming odds against them. Their job was to hold everything up for a couple turns -- the two big units of Gors, the BSB, the Bray Shaman, the ambushing Gors and the Minos now on my flank. Amazingly, they did far far better than I even hoped.

The shooters faced front and blasted away until the very last minute. The crossbow reformed to face the now frenzied Minos, but angled to avoid disaster for my spearmen. The spearmen moved up to the edge of the woods, right in front of all of the Gors. I had to give up the charge in favor of delaying an extra turn while still pinning them in place. To my surprise, not only did they hold up, they actually did well in combat for several turns!

To their right, my Greatswords, General and Swordsmen with BSB double-teamed the Bestigors. The second round of combat my General took off the Beasty General's head with 6 wounds from the Mace of Helstrum. The few Bestigors left fled and were run down. This left me open to charge into the flank and rear of the combat in which the brave Spearmen were holding.

On my far right, I surprisingly was able to deal with everything else with just a unit of handgunners, a unit of swordsmen and the artillery crew. Not so much the artillery itself... the crews were holding their own in combat, allowing the handgunners to toss away their guns and join in the fight as well! 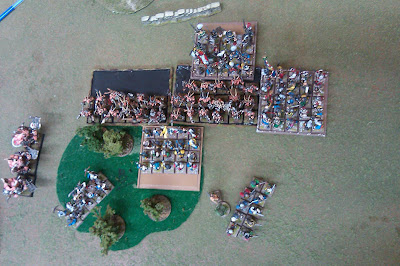 This was to be repeated in the mess in the photo above. There were also more Gors to the left of the Minos. They ended up panicking after being nearly surrounded by my three combat units at the end of the game. The two units of Gors in the phott were beaten & run down, while the Minos charged past them in the opposite direction. They lost on cow to the crossbowmen in combat, and were then defeated in the last combat of the game buy the handgunners in combat. Amazing as it was. my handgunners sealed the deal and let me table my opponent in turn six by killing two double-frenzied Minos.

This was a hard fought battle. The first two turns it was looking like a Beasty victory. Turn three I was hoping I could pull it back to a draw, but only if I could time everything just right in terms of delaying something, getting into position (thinking two turns in advance...) I was thinking the draw was a slim hope. In the end, everything worked out and I got a massive victory.

The fact that all four of my artillery crews and both units of handgunners held their own and caused several times their value worth of casualties against superior troops was the amusing highlight of the game for me.

The results aren't posted yet, but as I said, Shaun won Best Painted.

I managed to pull off my third First Place (overall) at a Siege tournament. Not only that, but by some miracle I was able to do it with my Marienburgers. I'm not certain what it is about this event, but I've got some sort of unexplained fortune there. It's a lot of the same players, rules, etc. that are used at the other regional events at which I usually do so poorly. Must be my bribes to the judges. ;)

After the event I very quickly ran over to Rivet gallery on the Short North (more on that later) before meeting up with the BREWS and friends for a bit of dinner before heading back up to Cleveland.

Once again, it was a good time, good people & good games. Also, if you're in/around Columbus, the Guardtower is a great store & gaming space.
Posted by ZeroTwentythree at 10:20 AM