Almost finished with the rigging on the Sopwith Pup. I screwed a few things up, and it's not the cleanest bit of modeling, but it's my first one and 1/72 scale isn't exactly large. I forgot a second (forward) tail stabilizer on each side.  I will go back and finish that. 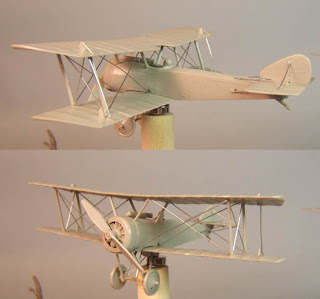 I also put together (minus pilot) the Albatros D.V. This is the last of the original 3 Airfix planes I had. 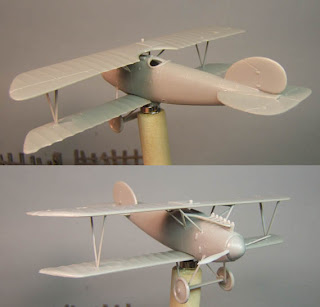 So, my question is... do I continue rigging all the planes? Some of them are far more involved than the pup. I'm trying to weigh the time & effort involved (which is significant, but not a horrible experience) with the fact that these are for playing games, not just display. So I've got some concerns about durability as well.

Still waiting on the batch of allied planes. Lost out on the German planes I was hoping to get on eBay, but I did stop at the semi-local hobby shop (Wings Hobby Shop in Lakewood, OH -- no web page). Like just about everything else in this damned city, it's on the opposite side of town from where I live. The selection of 1/72 WWI planes was predictably small, but they did have some. I grabbed a Fokker D.VIIF and two more DR.1's (one for me, one for a friend.)

The manufacturers are Eduard and Roden, and I can already see that they are better than the Airfix DR.1 and Albatross. The Airfix Pup was really a nice plane and of similar quality to the new ones I got, though.


Ordering a (some) flight stand(s) tonight.

As I've been inhaling all nature of unhealthy fumes while working on that first plane, I've been wondering... Why does Snoopy fly a Camel rather than a Pup?