There's not a lot of options for command figures in the WF Persian kit previously reviewed, so this is what I'm using: 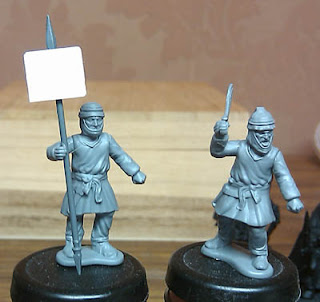 The leader with the sword is just bits from the kit, the standard is a bit of thin plasticard on a longer spear that was left over from the Amazon set. The spears in the Persan kit were too small for a standard. I probably should have done something with the point at the butt end, but I was lazy. Both figures have the same stiff left arm because of the issue with the only alternate that I mentioned in my last entry. I may see if there are some other usable arms I can borrow from some of the other kits.

Just a note... This shot and the last were taken with my phone. I notice that while it doesn't render color very well, and isn't great with large, landscapy photos, it does a decent job with detailed close ups. If you click the image above, the enlarged version is only about 1/4 the size of the original file.

Posted by ZeroTwentythree at 9:53 AM