Two more comments about the Persians in the previous review.

My boxes had 32 figures in them. Only 24 can be armed with bows. Not a big deal, just FYI. Also, there are no slings in the set. I think I will cannibalize some of the others I may have around for some slingers. The rest of the non-bow troops will probably end up with javelins.

Second, some of the left arms are unusable. See pic: 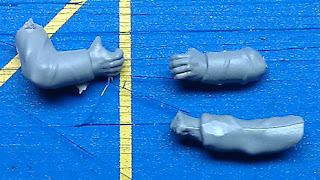 The arm is about 2/3 the length of the others, and if mounted on the figure, his hand only extends to about the waist. It looks like everything above the elbow is missing, but there are no upper arms to use with these. I can't figure out what they're even doing in the set.

Posted by ZeroTwentythree at 8:30 PM