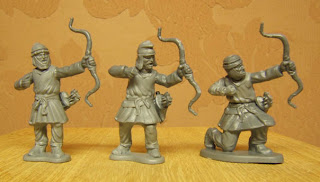 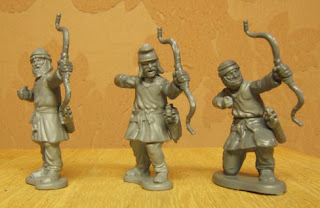 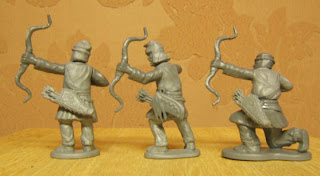 My comments are based on cleaning several boxes off their sprues and assembling just those few pictured above. I have't painted any... yet. I also haven't touched up some of the joints on the figures above, yet.

I think WF (or at least the original crew) was progressively getting better with each kit, and I think these Persians really show that. The detail is more pronounce, and the design is easy to paint. One of my biggest complaints about the Celts & Germans was the detail being too fine to easily paint on massed hordes of troops. They seem to have resolved that in this set.

I also think the faces are and improvement over some of the earlier sets. Although I am puzzled by the fact that they used two different neck joints. Some heads/bodies are flat, some are ball & socket joints. I haven't attempted to mix the two, though I suspect with a bit of work they should be OK.

As with earlier releases, there are a lot of different bits, a variety of heads and plenty of opportunity to make a huge horde of Persian levies look like it's got variety rather than a synchronized chorus line of the same three figures.

All that said, I think there are a few proportional/consistency issues that stand out on this set more than some of the past sets. The hands, for example -- the hands gripping the bows are big and meaty (almost like some of the worse GW examples) while the right hands drawing/releasing the (imagined) arrows are smaller. I realize there's some clothing & drapery there, but the upper torso of the the kneeling figure looks smaller than the lower torso and legs. The other two figures have one piece bodies, so appear more consistent.

A mix of weapons and shields are included, to build a variety of troop. But there are not enough of any one weapon to devote and entire box to one troop type. For example, if you just want a huge unit of archers, there are only enough bows for part of the box to be equipped as such. Personally, I'm going to use them as archers and javelin armed skirmishers (some conversions) so I think I will be OK.

As I said with earlier sets, if you're looking for a cheap way to bulk out units/armies, I think this is a good way to go. In fact, unlike the Germans, where I decided to stick with mainly a mix of Foundry, BTD and Crusader, I will end up putting most of my Persian stash to use, and even trying to convert a few for other purposes. Although not as flexible as their "Numidian" set, I do think that these offer some opportunities to be used as more than just Persians. (Well, "Persian" is a bit too general a term anyway, but that's a whole other discussion...)

I'll post some painted examples when I get to them. I feel bad for saying this (even considering my bumpy relationship with the new WF mangement,) but their own painted examples on their web page are really doing a disservice to these figures. But I guess that balances out with the fact that I've just given the figures a generally positive review. ;)


Posted by ZeroTwentythree at 12:34 AM