Got in a quick inter-holiday WAB game this afternoon. We played a double game. 2000 points each, my Romans and my Historicon team mate's Barbarians vs. Macedonians and... Hibernians?

I've had enough depressing losses to the Macedonians lately, so I asked to set up on the side that the Irish had started to occupy.

Due to the cramped battlefield, there was little room for manuever. I used more skirmishers than previous battles, and in spite of being fairly evenly matched in that respect I "won" that battle, largely thanks to a unit of barbarian cav that rampaged through light troops along the flank, and distracted one of the infantry blocks for most of the battle. Our battle lines got locked and I survived the initial onslaught without even needing to burn my stubborn ability when receiving the charge. The Irish mega-unit containing the general, army standard and priest gradually ground down one unit, but the rest of the Romans held their own.

My light infantry (Scutarii - run as Roman Auxiliaries) followed behind the barbarian cav, swung in and charged a full warband, ran it over on the charge, and then turned the flank in the last turn of the game. (They are the unfinished unit near the bottom of the pic.)

On the other half of the battlefield it sounded like things went OK for the allies until the general was killed. The Macedonians had 11 oracle points, which apparently went to good use. 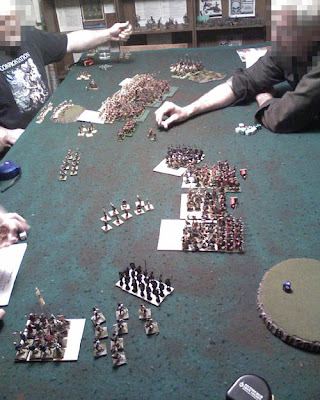 With all of the questions of the future of WAB, it was good to just put some figure on the table and play a game. It was also good to do well with the Romans for a change.