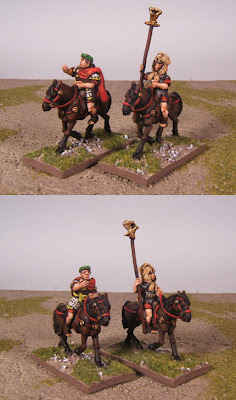 I finally painted up two mounted command figures from Foundry. One is supposed to be Pompey, the other is a mounted aquilifer.

The Pompey model, quite honestly, is awful. The face is a slightly distorted blob with a small ring representing a mouth that reminds me of Mr. Bill from Saturday Night Live. His arms are thicker than his legs. The casting was really bad, too. The right side of his face (left side from the viewers point of view) had a large chunk between the eye and the nose that I sort of removed, but it was difficult to get the remainder to look like a face. Considering "good" half was just a blob anyway, I wasn't too worried. One half of the laurel leaf was decently defined, but the other half was either poorly cast or poorly sculpted. The legs & sandals were pretty good -- they looked like they were borrowed from a better sculpted figure.

Eventually I will post the other figures from the set, Caesar and a consul or some other official. They're not much better. I painted Pompey first because, first off, I find him (the person) interesting, and second, my first pack had two Pompey figures and no consul, the replacement had another Pompey, so I am somewhat overflowing with this awful figure.

The aquilifer was significantly better. A nice clean figure.

I prefer the Crusader figure I posted a few weeks ago to Pompey.

Here's the Foundry Page for reference.