I mentioned that the Geier of the Carrion People figure was an old sculpt. It was actually the second along the lines of that design. (There are actually more than those two...) The first was sculpted & painted up as a one-off figure. I did it as part of the old Visions in Putty project on the minisculpt list (which I haven't looked at in years.)

So here's the original... 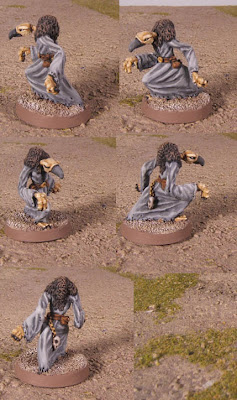 I actually like a few things about this one a bit better, like the head and positioning of the arms. However I was still figuring out how to do folds on drapery, so that's a bit off on this figure. The change in the head was based on actually looking at vulture heads. This one looks nothing like reality, where the others are more like somewhere on the distant horizon of reality.

Posted by ZeroTwentythree at 12:15 AM