It's been so long since I've used my Marienburg army, I had forgotten that the gobbo I received in the mini-swap at Grover's Grillfest this past summer was still hiding in the humans' ranks.

So I painted up his base to match the rest of my figures and have added him to my display case, alongside the plague bearer I received last year. 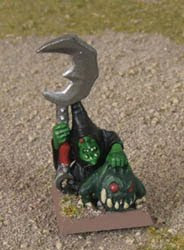 The price of admission to the Grillfest is one painted figure. Towards the end of the evening, we have a random draw to see who takes home which figure. Coincidentally, I had also brought a night goblin this year.

Posted by ZeroTwentythree at 12:28 PM

Email ThisBlogThis!Share to TwitterShare to FacebookShare to Pinterest
Labels: Grillfest