This weekend was another Game Day, held at the home of one of the members of my old gaming club. There were four time slots, each with two games running.

I missed the early slot, but got there in time to play a home-brewed giant robot game. The object was to recover some crashed alien technology and remove it off your own side of the table. Our side failed pretty badly -- but we did contribute to the carnage quite a bit. The other game going on at this time was WWI aerial combat, Blue Max/Canvas Eagles using 1/72 planes. I was too wrapped up in 'bot destruction to get any pics. 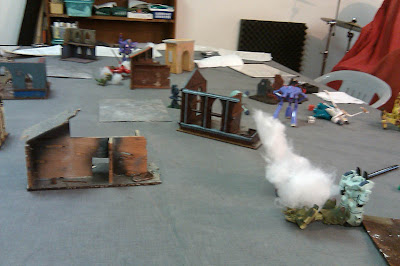 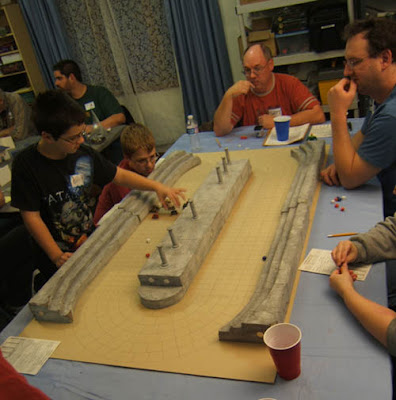 The fourth time slot was my game, a 3000 point game of Warhammer Fantasy Battles, Empire vs. Skaven. Each side split into four sub-groups so I could accommodate up to 8 players. As the evening started to wind down, the group thinned out a bit, so the other event (cards?) didn't happen. 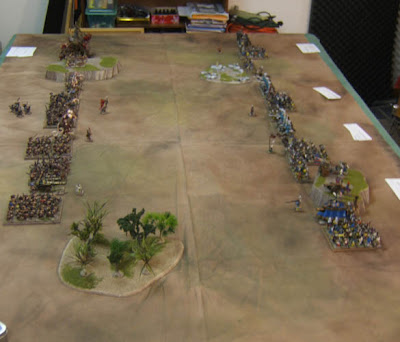 When I went outside to get the figures from the car, I thought I had seen a portent of victory for one of the armies... 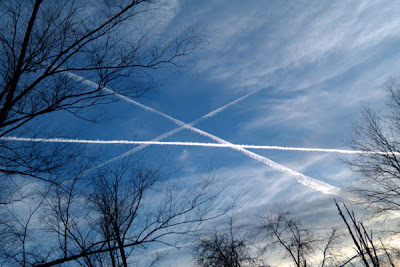 ...but as it turned out, the game was a draw. Each army seemed to do better on their own left flank, while the center was a fairly jumbled mess.

Posted by ZeroTwentythree at 11:08 AM