Below is an Empire standard bearer that I painted for the annual surprise miniatures exchange at Warhammer-Empire.com. This year I drew the name of one of the forum's most prolific and imposing modelers. I was a bit intimidated, so decided to go with a "stock" figure rather than try to model something myself. I figured I would try to paint something a bit extra, though, so I went with a standard bearer. My recipient has multiple Empire armies, and I was actually trying (unsuccessfully) to come with a good idea for a Nuln or Engineer's College standard.

Then one day my wife put Finding Nemo in the DVD player. The next day I flipped through the Empire Heraldry and Uniforms book and came across the imagery of the angler fish type creature that, according to the book, is sometimes used by Stirland troops in the region of the River Stir. I also liked the idea of bright colors lightening up the tone of an otherwise metal encased figure (metals are not my strong point.) So all those things came together for the idea below.

I'll have some other Empire figures to show off in my next entry.

So a bit of an follow-up to the previous entry....

First off, here's my Halloween Costume. I decided to go with a leathery look to the mask instead of the usual carnivale white look. I had already veered from "tradtion" with my lenses, so figured I'd just do my own thing. I incorporated some old prescription sunglass lenses into the eye-pieces, so I could actually see out of the mask! (At least when I wasn't overheating in it.

I'm making a few adjustments to it this week and will probably wear it to a Dia de los Muertos celebration this coming weekend. I'm considering dying the robes a darker color too. 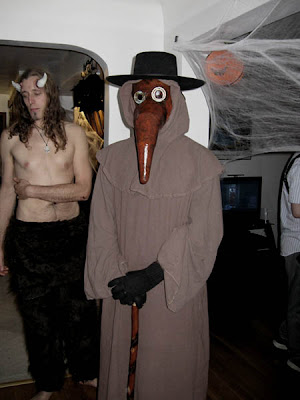 And this is the watercolor ("Lost Snabbit") that I donated to the gallery benefit/fundraiser I mentioned previously. I can't seem to take decent pictures of watercolors, as the light end always gets horribly washed out. But this is the best I could do. I'll be attending the benefit later on the same day as the Dia de los Muertos parade & festivities. Busy weekend again. 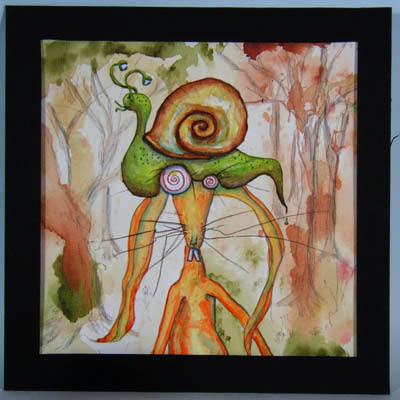 Posted by ZeroTwentythree at 11:26 PM