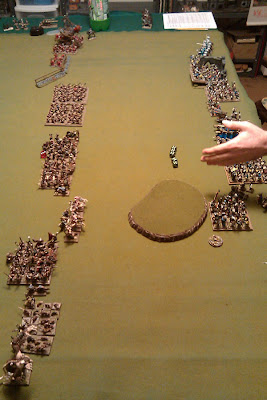 Next weekend I'm running a WFB 8th edition game at the game club's Game Day 23. Most of the participants have either not played 8th edition yet, or have only a small number of games under their belt. That includes me. So my friend Rich & I playtested the game this past Sunday.

The game was 3000 points of Skaven vs. Empire. I took command of the Skaven, Rich ran Empire. In the photo above you can see my advancing rodent horde closing in on his more defensive minded humans, along with the 27 he rolled for casting one of the fire spells (I forget the name at the moment - it did d3 hits per rank.)


I tried to keep the armies somewhat simple, with just a few heroes with limited magic items. I wanted to have some of the cool toys from each army, though.

The Empire was (roughly):


As is the theme of 8th edition, the game was pretty random throughout. The game swung back and forth, with both of us more or less at the mercy of the dice.

By the time we called it, the Skaven looked to be winning by a small margin. It's hard to judge when a couple rolls of the dice can completely change the outlook, though.

I've been playing WFB for 6 of its 8 editions and believe that until this point it only improved with each revision. I'm going to give 8th edition at least a half dozen more games. So far, however, I'm pretty dissatisfied. I simply don't feel like it's as fun (for me) as past editions. That contrasts with some of the other games I've read or played recently (Black Powder, Crusader, or even WAB2) which have seemed much more rewarding & entertaining.

Posted by ZeroTwentythree at 11:38 AM