Back in the Saddle

As implied in my last entry, I'm now unemployed. More or less. I'm jumping on some painting commissions, so I have once again been painting. 98% of it has not been my own figures, but paining makes me happier than sitting in front of a computer all day. So it's not neccessarily a bad thing. After all, I need to do something for income. If things work out, maybe I will stick with painting for a while. It's a bit of an uncertain venture, but less so than total unemployment. (I'm still pursuing some other options as well.)

I will be working in some figures of my own at some point. In the meantime, I did paint one figure for myself. Very quickly. I had already done the conversion and the flesh, so I quickly added a bit of color and the base. It was a broken Empire handgunner. I'm not even certain where/how I came into possession of this figure. So I cut off the front of a crossbow from the militia sprue and glued it on where the barrel of the gun used to be. Yes, he's got his little shot packages... I didn't think about that until I was actually painting the figure. But I think once he's in a unit of crossbowmen, he'll just blend in. I'll probably stick him in the back rank anyway. 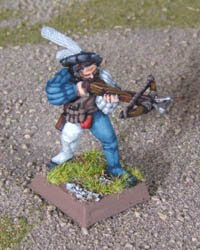 Posted by ZeroTwentythree at 12:58 PM