A Tail of Four Fomorians

My basic building block is groups of four 40x40 bases for most infantry. So this is my first little milestone, four Fomorians/Fimir. 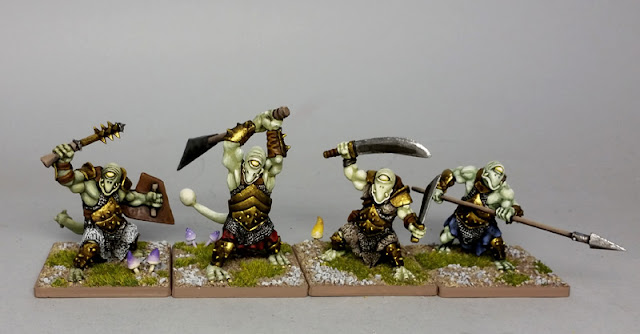 I had some ups & downs with my first two-part mold, trying to cast a couple of basic tail designs that I could use for future figures. 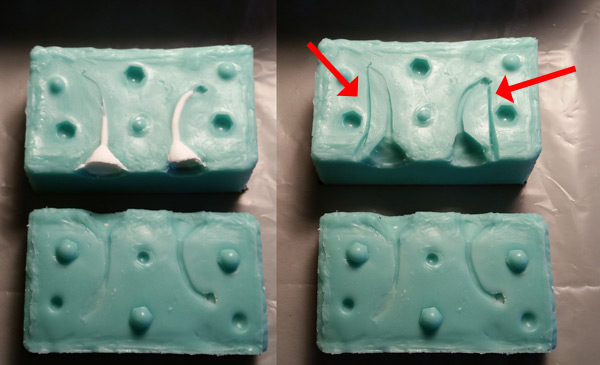 First, I mixed up far too much silicone. So the first half of the mold (top) is way too thick, and I still had enough left to pour a single "cup" mold of one of the preferred heads. (Which is an OK thing, I guess because those molds deteriorated quickly -- though I've probably got more than enough heads at this point.)

Next, my first casting (left) didn't work so well. I knew I should have created some vents, but for whatever reason, I decided I preferred the trial & error method of learning. So, I removed the failed castings and then cut some vents (right.) Below is the second cast -- success! (Though not without an air bubble or two.) 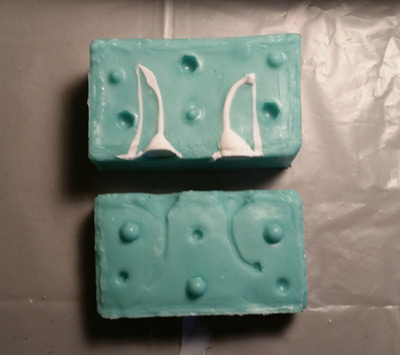 So after this whole process -- a few one-piece block molds, and my first two-piece, plus building an initial unit of four figures, where do things stand?

1. A Fomorian/Fimir army is GO. I still need to work out things like what to do for everything besides the armored warriors/Fianna Fimm. But I can see that it's within reach. I will start with roughly a "division" -- about four units of four figures, plus a general, and one or two critters. So with the figures above plus the bog demon, I'm about 25% into that first goal.

2. Casting is GO. I'm still working on refining technique, checking out further materials and tools, and getting better castings. But I've got over the big hump of starting out and achieving a degree of success. I have the equipment for a pressure pot, but nowhere to use the air compressor. I've seen a manual bike pump used before, so I think I will try that. I hope that the pressure pot will produce better molds & castings. I think my next step will be to try molding & casting a full figure or two. That will give me some further practice in all aspects -- sculpting, molding, and casting.

Oooh, and just a week away from (hopefully) getting to play a few games! It has been years since I've played anything, and just as longs since I've seen a lot of my old friends, so I'm really looking forward to this!

Posted by ZeroTwentythree at 6:32 PM