The end of the month was a bit of a forced march marsh, but I think I pulled off a respectable little group of figures for a month of work. I did cheat a little, as some of it was started before March, and some of it wasn't painted by me. Not a terribly good photo, I'm afraid. 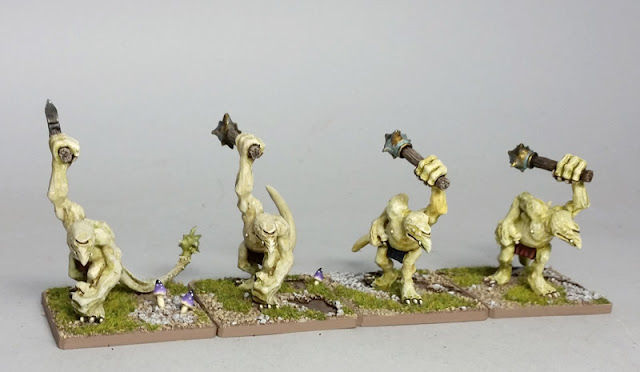 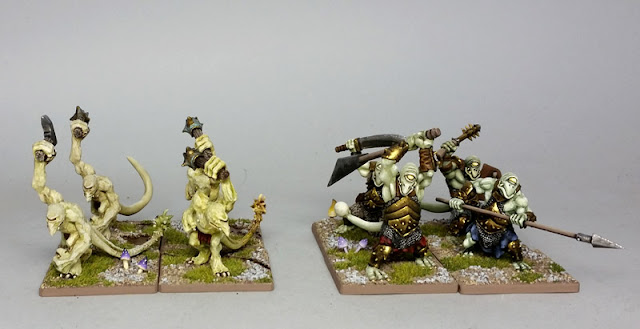 I had a request for a comparison photo, so here it is. Obvious style differences, but I had never planned on getting any of the old Citadel figures (nor is it likely that I will get more than the last few I have yet to paint. But I'm OK with how they look together.

My concept of the Fomorians/Fimir (I need to settle on just one name...) leans toward the warrior & raid culture, as hinted at. I don't see the Shearl as being included in raids or any sort of fighting at all, so I don't want to include them as some lists/armies do. So I would like to emphasize the difference between the Fimm warriors and the Fianna. I imagine the latter being the the larger & more dominant group, while the latter are the lower class warriors, or the young & experienced out to prove themselves. 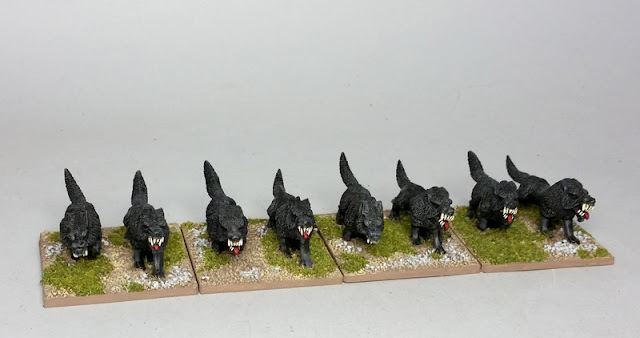 Lastly, the first batch of moor hounds. Old Citadel plastic & metal dire wolves. They were painted when I got them, so I just gave them some minor touch-ups and re-based them. A bit of cheating, but I did put some work into it. These aren't included in old GW Fimir lists, but similar options pop up in most fan lists/material, and I like the relation to myth & literature.

They will also see use with the Undeadish, where they will fit into a division based on the Wild Hunt of Herne, or Kerenos of Moorcock's "Fhoi Myore" from the Corum books. I had considered painting them as described by Moorcock, but I think the black hounds are a better choice.


So that's my Month of Marsh! Well, that plus the 'shrooms posted yesterday. I may get a chance to base them up, but that's unlikely, and I'm going to be busy and probably not get anything else done the next few days.

Looking forward to April, I'm still thinking about some giants. But I'd also like to continue working on the cyclopian bog raiders. And undead. And Marienburg mercenaries. So... really I'm not sure. Other than the giants -- definitely one or two of those.


Posted by ZeroTwentythree at 5:22 PM