Lost in the Marsh


Well, my plans for the Month of Marsh have gotten bogged down as I've been swamped with other obligations.

I am still making one last valiant push for the theme/challenge before the month ends. Plans for more of my converted Reaper Fomorians/Fimir really fell through. However, I have had the unexpected good (to say the least) fortune of coming into an almost complete collection of original Citadel Fimir thanks to a friend.

So after some paint stripping and tail replacing, I've started a few... 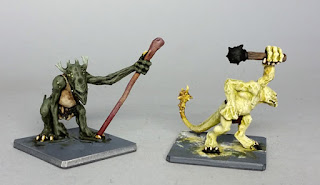 My last minute goal for the Month of Marsh includes the Dirach (left) and the test Fimm (right) as well as some other stuff. Both are still unfinished, obviously.

Experimenting with many washes again. I wanted to keep the Dirach darker than the rest. And dirty. They are daemonologists, and I imagine him as being something like Kreacher in the Harry Potter films (haven't read the books,) muttering darkly to himself as he goes about his business, with little regard for others. The lowly Fimm was more of an experiment, and I wanted to give it a bit of a less healthy, jaundiced look than the armoured (Fianna) Fimm I've previously worked on (the Reaper conversions.) As I layered washes, it started to take on a look that reminded me of oldschool, washed out fantasy illustrations. So I kept going with that and I'm pretty happy with it so far. Unfortunately, none of that detail nor texture nor color comes out well in digital photos with my phone. So you'll have to take my word for it. ;)

So for the remainder of the "Month of Marsh" challenge, my hope is to finish the Dirach, the test warrior, plus his three colleagues, and the remainder of my 'shrooms from Deafnala (which I have also already started -- sorry, no pics yet.) That's more than a little optimistic.

Posted by ZeroTwentythree at 2:45 AM