Holy Bog-burgers, I Played a Game!

Actually, three games! I managed to shirk my daytime responsibilities this past Saturday and meet up with some friends I haven't seen in far too long. They've been playing Kings of War since the new edition came out, and although I had my doubts about the rules I figured it was worth a try.

I was pleasantly surprised at the gameplay.

I had initially drawn up a list for my Marienburg mercenaries, but at the last minute decided to switch to a one-dimensional Undead list. If I just spent the past year painting all that monochrome, I was going to see them get some action on the (tiny) field of battle!

Mid battle vs. Abyssals -- doing well in the center and right, but will the left collapse before the Undead can pull off a victory?

My opponents were Abyssals (lost,) Abyssal Dwarfs (lost,) and Undead (won.) It was a pretty evil round of games, obviously. We played three scenarios from the rules. The free PDF doesn't come with these, so I don't remember the names, but the first was to occupy the center of the battlefield, the second was to hold a random number of objectives on the battlefield, and the last was a combination of the objectives plus casualties.

As far as the rules, I went into it with mixed feelings. But I was pleasantly surprised so far. The mechanics are pretty simple & straight forward. It's quick to pick up the rules and relatively easy to keep track of your army. Maneuver, flanks, and positions are important -- it seems like you to need to think of the whole battlefield plan rather than relying only on a super-hero, death star, or game winning spell from what I saw. There were definitely some more powerful units/monsters/characters, but they were neither invincible nor all-powerful. There was a pretty good flow to the game, but it tends to swing back and forth a bit since each player only acts in their own turn. The only thing I ever did during an opponent's turn was put down wound or disordered markers. I think that's one of the chief downfalls of the game design. Fortunately, game play is pretty quick, though, so you aren't waiting for long. Might be a bigger issue in larger games, though.

I've seen a number of complaints about the mechanic of not removing individual troops. That never came to mind. It's simply not WFB, so I never thought that was something that was missing. Units do fight at "full strength" but combats run their course pretty quickly, and there's enough going on anyway -- units moving to flanks, wavering after a nerve test, casualties mounting up, etc. that there was still a sense of direction to a units fate. In fact, wavering is a big deal.

Rules and armies have a reasonable amount of special rules, so the game is easy to pick up and understanding what's going on with your opponents army is relatively easy to figure out. One of my pet peeves about WFB was that every month or two you had to learn a pile of new rules for the latest army, let alone sort out how they dealt with all of the other rules, how to counter them, etc. Each army in KoW still seems to have it's own flavor, though. For example, a lot of the Abyssals had fury & regeneration, which really kept them aggressive in combat. My undead had the combo of shambling and surge, and were largely immune to wavering. Abyssal dwarfs had crazy shooting (mortars and thrown mutant dogs??) to soften the enemy and break formation a bit.

Undead on Undead action. Zombies are chanting for brains... but none to be found.


Not my favorite game, but it had a decent balance of detail and easy play-ability (leaning more towards the latter) that made it fun. More detail and character than something like Hordes of the Things, but much simpler than WFB. And the rules are much cleaner than either of those. My friends have been playing since KoW2 came out, and they said it had enough nuance to keep them interested (and from what little I've seen so far, I can see that) but also accessible enough to a new or casual gamer. It doesn't feel like you have to devote a large chunk of your time (and money) to keeping up with army books, "killer combos" and internet strategies to play without getting tabled all the time like WFB or Warmahordes.

That's only from three games, so I may be proved wrong or learn otherwise. I do hope to play some more. Like I said, I had fun. That's really what matters (along with the crushing of enemies, driving them before you, and the lamentations...) So... more KoW in my future? If I can manage it, yes.


I quickly and poorly painted an old Ral Partha giant centipete model. The eyes are sculpted like that (recessed pupils) and after I took the photo I repainted them flat black to hide that fact. I also gave the centipede a nice gloss varnish. Looks a little better, but not worth taking a new photo. ;) 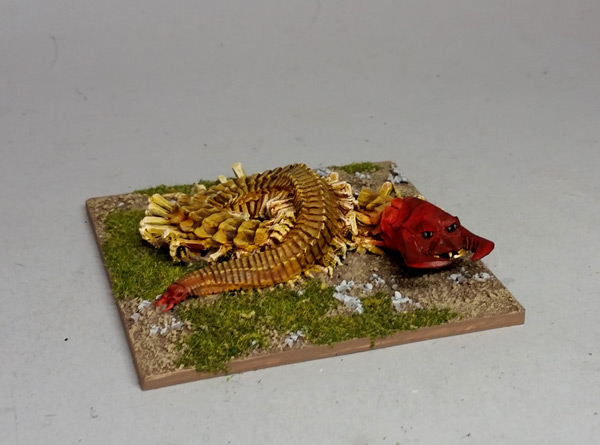 Oldhammer -- it's not always pretty, and my painting didn't help any.


Thanks to one of my friends at the Kings of War day (the host, in fact) I am now the proud owner of an almost complete set of the old GW Fimir figures. I didn't really get a chance to look at them til today, but it looks like all nine figures, plus a duplicate Fimm -- so this will work out well for two units of 3 or 4, plus a Dirach & Meargh. Oddly, when I was looking through the old catalogs, one figure is listed as different things depending on which catalog/ad. Looks more like a warrior (Fimm) than a Dirach, and I don't think I would need a second Dirach anyway -- so that's what I'm calling him! 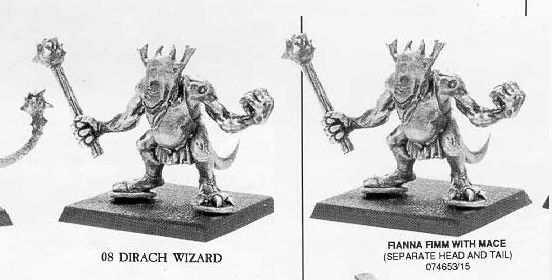 The one thing I would like to get, however, is a proper Meargh head (aka "Head 3".) A long shot, but... does anyone out there in the internets have a spare one? 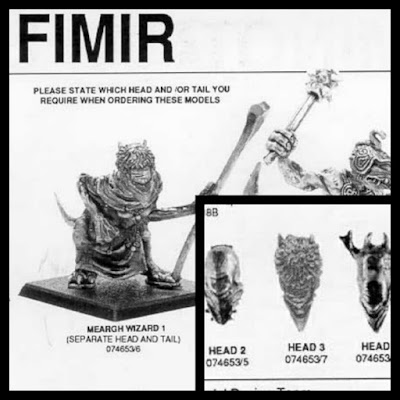 Comparing these figures to my own conversions and sculpted heads & tails, I'm pleased that there is so much inconsistency of scale & proportion within the very small Citadel range that they will fit OK with what I've done, and have encouraged me to worry even less about consistant scale in plans for including more figures in my own conversions & army.

Posted by ZeroTwentythree at 10:56 PM